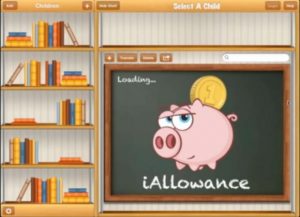 When my children receive their allowance, they divide it into giving, saving, and spending piggy banks. You can read more about how we set that up here and here. We are trying to teach our children the importance of this division and that they need to track where their money goes. For tracking, we were using the ledgers that I made in this post, but have now decided to track the amounts electronically, while still paying them in actual cash.   I’m a big proponent of tangible when it comes to kids because it has more meaning, but now that they understand what they are doing, I’m happy to move to an electronic version because it’s much easier!

I cannot emphasize this point enough – it’s really important to understand what is happening before moving to an electronic system. I’ve seen business accounting records with errors that to me were glaringly obvious, so it was clear that the person keeping the books didn’t really understand what they were doing.  Software is fantastic at calculating, but it cannot read your mind. Ok, rant over.

Apps for allowance tracking are plentiful, but iAllowance caught my attention because it can integrate our happy dollar system (see this post) and money allowances all together in one app. If you’re using virtual banks where mom and dad actually keep the money and just track how much belongs to the kids, you can set this app up to pay the kids automatically each week. Because we still have actual money banks and use iAllowance to track the balances in those banks, I set up the allowance as a chore to complete every Friday. I check it off and the money goes into their virtual bank once we actually hand over the cash. I set up separate banks in the app for giving, saving, and spending.

The kids take their giving portion with us to church on Sunday, and record it in the app that they gave it out. They also record their own purchases against their spending accounts. It’s much more convenient than the ledgers so they are more likely to make the entries without prompting. Success!

Other features in this app include the ability to calculate interest for particular banks, setting up chores to pay money into banks automatically, and many other options.

iAllowance as a chore tracker

My daughter (age 8) wanted to use the app to track her chores as well, so I set her up. I kept my son (age 7) on our magnet system because that’s what he preferred. It took a few minutes to set up the chores in iAllowance, mostly because I wanted the descriptions in French. The app comes with a lot of pre-loaded chores with pictures and is quite intuitive to use. I love that it syncs across my devices and I can password protect changes to the chore list itself. My daughter can open the app and check off what she’s completed and then I go back and approve that it’s been done correctly. Once I approve the chore, the happy dollars (called stars on this app) get put into her bank.

I set up two banks for stars/happy dollars: One for general use, and the other to save for the Lego Movie (the current long-term goal). The ability to customize in this app is fantastic! I was able to set it up to do almost everything I wanted it to. The only weird thing I had to modify was to set the chores up to be completed multiple times in a day even though they are really only being done once. My kids get double rewards if they do a chore without being asked and there was no way to tell the app this information. So, we just decided that my daughter would check of the chore twice if she did it without being asked, and once if I had to ask her first.

If I could ask for one feature in this app, it would be for one-time chores. I would love to be able to go into tomorrow’s list and add an item for just that day. For example, weeding the garden is weather dependent. It doesn’t necessarily happen on specific days of the week.

Overall, this app is fantastic and I would definitely recommend it if you want to use an electronic tracking system.

Summer is usually when we introduce new chores for the kids. Because there are fewer extra-curricular activities going on, we have more time to work with them as they learn. However, this year, I think we’re going to focus on improving the quality of work with what they are currently responsible for. iAllowance has space for including notes about chore completion. I need to take the time to type in there that dusting includes inside the TV cabinet and that cleaning their rooms does not mean putting stuff under the bed. That way, the app can nag them instead of me. 🙂

How do you track your kids’ allowance and chores?