Before implementing this idea – Our house looked like a tornado went through it at the end of each day.  I’d spend the last 30-60 minutes before dinner nagging the kids to pick up their toys.  Nothing I tried worked – not the promise of being able to watch TV when they finished, nor the removal of the toys they didn’t clean up.

After – Clean house at the end of each day with no more nagging!

My motivation in implementing this system was actually to get the kids to do chores around the house with minimal complaining, while saving me the hassle of nagging them on a daily basis.  However, as we’ve gone along with it, I’ve realized that it has some basic money education in it as well.
No, this is not an allowance system.  Our kids don’t get an allowance yet.  When they do, I’m not sure whether it will be linked to their chores.  I agree with the idea that children are part of the family and need to live up to their responsibilities.  They shouldn’t get paid for making their beds or cleaning up their stuff.  However, I also agree with the idea that children need to learn that in life you do the things you don’t want to do in order to get the things you do. 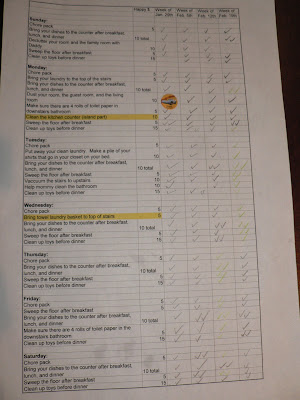 So, instead of paying the kids in real cash when they do their chores or other tasks that we want them to do, we pay them in what we call “happy dollars” (a term made up by friends of ours who previously used a different reward system for their kids).  They each have a chart with their household chores written on it for each day of the week and the amount earned for each chore.  As they do each chore throughout the day, they (or I) check it off their list.  At the end of the day, I total the amount of happy dollars that they have earned and pay them with Monopoly money that we pulled from a few different versions of the game that we own.

We started with only a few items and added 1-2 small new tasks each month.  Most items are slotted for the beginning of the week because it works better with our routine.  Another benefit is that we can bump tasks to the next day when needed without changes overlapping into a new week – easier for both the kids and me to keep track of!

What can the kids spend their “money” on?  At first, their only choice was computer or TV time at the price of $1 per minute.  We chose this because it was something that they really like and we were willing to remove it completely if they didn’t have the money to buy minutes that day. 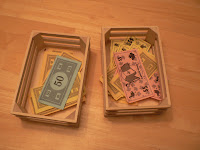 After six weeks, the system was working so well that they had accumulated a boat load of happy dollars in their bins.  It was time for more options of things to buy with their earned dollars.  We added in Play Doh activities (which I priced high because it’s such a pain to clean up), extra stories at bedtime (they definitely don’t pay for the usual number – only extras), and other things that they like to do.  We definitely did not include things like trips to the museum or play dates on the list of rewards because we felt that those activities should not be contingent on a reward system.

As the months are going along, I am continually surprised at how well each child is completing their assigned tasks.  Yes, they complain sometimes.  No, they don’t dust perfectly, but hopefully they miss different spots each time so it’s good enough.  We work together on some areas like the kitchen and bathrooms.  Amazingly enough, it is actually faster for me to work with them than to do it by myself!  We talk while we work, which makes it more fun.  They ask me about whatever they are wondering about that day or tell me their latest knock-knock jokes.  Occasionally, one of those jokes is actually funny.

Money education in the system
Is this system the be-all and end-all of money education?  Obviously not.  Like other life goals, becoming financially wise is a process of learning good habits and putting them into practice.  We are only at the beginning of this journey.  As we go along and ideas come to me, I’ll post them.  Hopefully, one or more ideas will resonate with you and you’ll be able to tweak them to meet the needs of your family.

Do you use a chore and/or money system at home?  I’d love to hear about it.  Please post a comment or find me on Twitter @LeanneSeel.

UPDATE March 23, 2012 – As requested, I have uploaded a copy of the spreadsheet that I use.  You can download it here.  When you open it, you’ll see 8 worksheets across the bottom for various months.   Z worksheets are in English.  A worksheets are bilingual (French/English).

UPDATE  September 9, 2013 – We have been tweaking this system over the last little while.  You can read about some of the changes we’ve made in today’s post here.