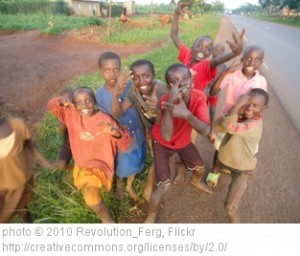 We all hear the rumblings about the ungratefulness of today’s children and we want our kids to be different.  We want them to understand the value of what they have and give back to the community in some way.  Part of teaching kids about money involves teaching them about giving it away.

As always, leading by example is the first step.  It dawned on me recently that my children don’t see my husband and me giving money away on a regular basis because so many of these transactions are done online while the kids are doing something else.  We still give to our church by cheque, but the offering plate goes by after the kids have left the service to go to Junior Church.

A friend of ours was hosting a Christmas shoebox party, so we decided to participate in that.  Each child filled one box.  This project helped them understand that there are children in the world who don’t have what they have, and two kids somewhere in the world got the gifts that my children picked out.  I let them choose what went into the shoe boxes based on the guidelines from Samaritan’s Purse.  This was fun for them, but the part that I missed was a budget.  I know that I’m an accountant and should think of such things, but I didn’t.  Next time, I’ll set a spending limit per box so that my son will choose a regular bouncy ball and not a Lightning McQueen bouncy ball, and so my daughter will choose a regular hairbrush instead of one with Cinderella on it.  Lightning McQueen and Cinderella are great and all, but for a child who has never seen either of them, it didn’t make sense to spend the extra on the licensed items.  A few extra dollars per item and all of a sudden I spent a lot more on each box than I should have.  I did veto some purchases that would have been just too expensive, but they could have learned a lot more from this process if I had given them a budget from the start.  Lesson learned for next year!

To take our charitable efforts to the next level and learn some budgeting at the same time, I decided on another project for the kids based on this blog post about teaching kids philanthropy.  The post’s author, Paul Schmitz, gave his children a budget and had them research charities to give it to.  The children decided how much to give to each charity and then they made the donations, mostly in person.  His children were 9 and 6 when they started this tradition.

My kids are slightly younger than that, so I decided to modify the idea to fit their level of awareness.  Having them identify potential charities would be overwhelming because they are not at the point where they can really identify community needs beyond hunger and clothing.  Issues like abuse prevention and cancer research are just too abstract for them right now.

So, rather than have them choose charities, I chose the World Vision gift catalog and let them choose items from it to be sent to where they were needed.  I gave them each a budget of $200 and let them pick what they wanted to buy.  My son (age 5) chose school supplies for 1 classroom ($50), 3 soccer balls ($30), 3 warm blankets ($30), and agriculture packs for 6 families ($70), and had $20 left over.  My daughter (age 7) chose 1 goat ($100), 10 fruit trees ($60), and had $40 left over.  They combined their leftovers and chose 4 mosquito nets ($60) together.  The aspect of budgeting definitely sunk in.  They were looking at various items and ruling them out when they didn’t have enough money left, and they tried to get as many different things as they could, lobbying each other as they went along.

We used the printed catalog to choose the items and then went online to make the purchase.  One of the “gift in action” videos brought smiles and giggles as we watched the African children petting the goats.  When it came time to pay, I took the opportunity to mention that using a credit card is borrowing money, and that when the bill arrives, Mommy and Daddy are going to have to hand over $400 in real money to cover what we bought.  We pay right away to avoid having to pay more later.

Overall, the whole process took around ½ an hour.  It was a quick lesson in budgeting and in giving.  I think that delivering the donations in person would have been better in terms of learning what charities do, but since taking goats to Africa was not practical for us, we did what we could!

What charitable activities do you like to do with your family?  Do you have any ideas for me for our next project?

0 responses on "Teaching kids about giving"