Teaching kids (even preschoolers!) about money by playing Monopoly 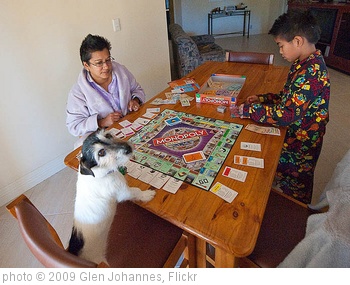 When I was a child, I played Monopoly with my Grandmother whenever I was sick and didn’t go to school. Our family would also play on the weekends occasionally. For the last few months, this game has been making a comeback in my house because my children are now clamouring to play. For a game that people seem to really love or thoroughly detest, it certainly does teach a lot of things about money: Buying and selling property, paying rent, collecting a “salary” when you pass Go, mortgages, and even taxes on the $200/10% pay space. Coupled with all these learning opportunities is the practice that kids get by counting out the money they need to execute all of these possibilities.

Of course, my children don’t play Monopoly for its educational value. They play it because it’s fun. My 7 year old daughter likes to buy hotels and collect the purple and pink properties because those are her favourite colours. My 5 year old son likes to buy and trade for the railroads because he is obsessed with trains. I like to play because it’s a spur-of-the-moment activity that we can do together, and I love spending time with my family. I like that the game is interesting for both adults and children because it can be as simple or as complicated as you make it. As an added bonus, it’s one of the rare games that I can play with my husband and actually win most of the time. No, I do not cheat. (If you want to know my Monopoly secret, you’ll have to e-mail me because my hubby faithfully reads this blog.)

To speed up the game, we deal out some (but not all) of the properties at the beginning, and change the hotel purchase to require 3 houses instead of 4. We also do not allow immunities as part of trade discussions. We make some trades that favour the kids as well to keep their interest and speed up the bankruptcy process. Of course, the first few times that one of our children ran out of money, there were meltdowns, but we just see that as part of the process of learning how to lose (another important life skill). My five year old has claimed victory a few times with those railroads and likes it when his mom and dad tell him “Good game, buddy” at the end, so he’s started saying that to us when he loses.

There are some simplified versions of Monopoly available for younger kids. One of those is Fairyopoly, which my daughter really liked for a while, but I found it torturous to play. Thankfully, we’ve been able to shelve that one and just play the regular version. We help the kids count their money and coach them on their decisions as we go when they ask for help. It just takes a bit of patience to play this game with younger kids.  That being said, children under 3 should not play this game because of all the small pieces.

Older children and teens can stay engaged with Monopoly by strategizing with their trades. They can start to decide on their own what a good deal is and learn by the consequences whether they made a good decision or not.

I don’t know if my Grandmother realized how much she was teaching me on those many days that we played this game together. If she did, her educational intentions definitely did not overshadow her enthusiasm for playing the game and for spending time with me, and that was more important than any money lesson I could have learned. I miss you, Grandma and hope you’re getting a chance to play Monopoly in heaven!

5 responses on "Teaching kids (even preschoolers!) about money by playing Monopoly "