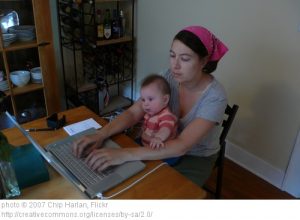 Do you have an up-to-date listing of everything that is in your home in case you ever have to file an insurance claim?  Me neither, but apparently it’s a good idea.  When our house policy came up for renewal last year, I did a lot of research on the subject and managed to cut our premiums by 52% (you can read about that here).  As part of that research, the subject of a contents inventory came up, so I added that project to my never-ending to-do list.  Finally, after months of dread and procrastination, I have tackled this beast of a project (not completed mind you, but at least tackled).

I found an app called encircle that was supposed to make this process easier.  Great website, beautiful screen shots, and best of all, the app was free!  I decided to give it a go.  The interface in the app is fantastic – very intuitive and easy to use.  You can take pictures and then add details (like model, serial number, etc.) later on.  I took a few pictures of one room and then waited while it tried to sync the photos over Wi-Fi.  After about 25 photos, the app couldn’t handle any more so I took a break while the thing kept “thinking”.  Hours later, it was finally done.  Coincidentally, later that night there was an update to the app to “fix a few things in the synchronization code.”  I tried again the next day after installing the update, but the app kept crashing even after I rebooted my phone a few times, so I gave up.  Too bad, really because it looked so great.  Perhaps they will release another update soon to fix whatever is wrong.

I investigated a few other app possibilities and they all looked rather cumbersome to use.  Of course, by this point I was fed up with the whole idea so perhaps I didn’t give them a fair shake.  In any case, I decided to go somewhat old school and just take a bunch of photos with my camera.  I plugged the camera into our desktop when I was done and imported all the photos giving them the tag “home inventory”.

Once the photos were imported into Picasa, I just right clicked on the folder where they were and chose to upload to a Picasa web album.  I reduced the resolution to 800 pixels (we’re on a bandwidth diet here while we try to figure out where our gigs of daily uploads are coming from), and set the privacy settings to “just me.” Trust me; nobody really wants to see inside our closets.  It took a few minutes to upload all the pictures and then it was done.  The whole process of taking the pictures, importing them, and uploading a backup took about an hour or so from start to finish. I should have just done that in the first place, but it’s such a boring thing to do and honestly taking pictures of storage rooms packed with kids’ toys was a little depressing.

As for the accompanying spreadsheet for larger items with serial numbers and associated costs, that’s going to have to be a project for another day.

Do you keep any kind of record of house contents?  If so, how do you organize it?

1 responses on "Making a house contents list for insurance purposes"