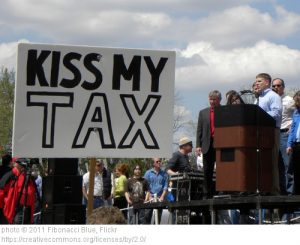 It’s an election week here in Ontario. Responsible citizens are being forced out of our eye-rolling apathy to make a choice among some rather underwhelming options. I am not going to try to convince you to vote one way or another – that’s not the purpose of this blog. However, after reading a friend’s post this week about how corporate tax cuts only give CEOs big bonuses, I thought it would be a good idea to clear up a few misconceptions.

People don’t generally choose to live in a province based on its tax rate. If we did, we’d all be living in Alberta or Nunavut, and the Maritimes would most certainly be empty. Corporations on the other hand, will absolutely relocate if they can lower their costs enough to justify the move. New corporations will choose a location where their costs are going to be the lowest. If you could buy the same car from two different dealers but one is charging thousands of dollars less, wouldn’t you go with the cheaper option? The hard truth is that companies do this every day – except they are shopping between provinces and/or countries.

Do CEOs get big bonuses? Absolutely. Do they deserve it? I don’t know. I understand the rationale behind these huge payouts, but I still find it ridiculous to pay one person an amount that could put a significant dent in world hunger.

Would CEOs still get big bonuses with higher corporate rates? Yes, they would. Raising corporate taxes is not going to eliminate all the evil in the boardroom. It would just give executives more incentive to take their boardrooms elsewhere, relocating thousands of jobs with them.

What about payroll taxes?

The last Ontario budget that was tabled proposed a provincial pension plan. Under the plan, workers would contribute 1.9% of their annual wages up to $90,000 and employers would match. Great idea, right? Because the government does SUCH a great job of managing money that we should give them more! (said no one ever). Do you really want an additional 2% of your wages leaving your pocket and going into government hands?

The other side of this is the discussion that will inevitably happen in businesses across the country if this goes through. In this case, the Blunt Bean Counter took the words right out of my mouth. You can read what he has to say here: http://www.thebluntbeancounter.com/2014/05/the-ontario-budget-simple-math-no-new.html

So I’m really telling you who to vote for, right?

No, honestly I’m not. I’ve read through the platforms (there’s a great summary here), and I’m not crazy about any of them. I think I’ll be holding my nose while marking my ballot this Thursday. How about you?