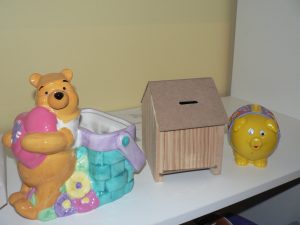 We started paying our kids an allowance this month.  We’d been discussing the possibility for quite a while, but were holding out because we wanted to make sure we used the allowance as a teaching tool for developing good habits right from the beginning.  Until we knew how we were going to do this, we didn’t want to start.  Of course, there were also some practical considerations. We wanted to make sure that the allowance wouldn’t be strewn across the floor like the tooth fairy money that almost got sucked up by the vacuum cleaner.  We also didn’t really want to increase our kids’ buying power for more stuff they really don’t need.  What would they use allowance money to buy anyway?  Candy?  No, thanks.  We try to keep sugary indulgences to once a week, despite the constant backlash – particularly from our daughter who has decided she wants to be a chocolate taster at the Hershey factory when she grows up.

The other practical obstacle was the amount.  I had heard and read about giving $1 times the age of the child per week.  After tallying that to almost $50 per month, we squashed that notion pretty quickly.  In spite of our lack of debt, we still need to watch our expenses.  We recently did some cost cutting to reduce our monthly expenses.  Giving the kids the money we’ve saved by scrimping on our TV and phone packages didn’t sound that appealing.

So, after some thought and discussion, we decided to start with the small amount of $1 per week for each child.  If the kids follow our household allowance rules (see below), we’ll increase their weekly amounts. If I find any money on the floor, it’s mine!

We rounded up the piggy banks we have in the house and assigned 3 per child.  I labelled them giving, saving, spending, and proceeded to explain our three allowance rules.

Our allocation of money is based on our values – these are not hard and fast rules that I can give you research to back up.  It’s just what we’ve chosen.  Yours may look different or have different reasoning and that’s fine.

We feel that it’s important to teach our kids to give back for several reasons.  First, everything that we have comes from God and so we give a portion back to Him.  Second, there are many people in the world who do not have what we have.  It is our social responsibility to do what we can to help those who are less fortunate.  Third, money can become a powerful thing when we seek after it too much.  When we give money away, we take away its power.

To that end, when we give the kids the allowance each week, it’s broken down into 4 quarters.  One quarter goes into the giving bank, two go into the saving bank, and one goes into the spending bank.  Do we as adults use the same 25/50/25 percentages?  No.  But our kids are quite capable of doing so – they don’t have any expenses yet!  Now is the time to teach them the joy of giving and show them the power of saving early using compound interest.

Keeping track of money is a good financial habit that we want our children to carry with them for their entire lives, so we’re starting it right from the beginning.  I made them simple Excel spreadsheets – one for each piggy bank – where they write down every time money comes in and when it goes out.  I explained that they can know exactly how much money is in each piggy bank without having to count it by looking at their ledger. You can download the Excel pages of my ledger here.  I also made covers for the ledgers using clip art pictures to make them visually appealing.  My son resisted the writing part, but once he knew he wasn’t getting the money until he wrote it down, he quickly changed his mind.  I’m sure there are apps that will do this, but there is nothing wrong with old school pencil & paper.  They are practicing their math and writing at the same time.  Some of you may be rolling your eyes and pitying my poor children who have an accountant for a mom, but I can live with that!

Rule #3 – Piggy banks do not have legs

The piggy banks & ledger books do not move from their assigned location.  No more money strewn across the floor.  They each have a specific place in their rooms where the banks go and they stay there.

So far, it’s going well.  Both kids are following our money rules and learning about giving, saving, and spending.  At the end of the month, I plan to pay them interest on whatever is in their saving bank plus what they have chosen to accumulate in their spending banks towards a future purchase.  I’ll probably give them a penny for every dollar (1% per month) in order to make the calculations easy enough for them to understand.  That should motivate them reasonably well and keep it affordable for my husband & me when their savings banks get bigger.  Once they’ve accumulated enough in their savings piggy banks to warrant a bank transfer, we’ll move it into their high interest savings accounts.  I wonder how long it will take them to figure out that the Bank of Mom & Dad pays more interest than the real bank?

Update May 2013:  We tweaked our percentages a bit – read more here.