Teaching kids about money: Tips for the grocery store 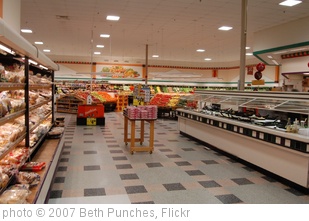 Do you grocery shop with your kids or alone?  For so many parents, the thought of actually getting to the grocery store on their own sounds like bliss.  No toddler whining in the cart.  No older kids to chorale through the aisles.  Best of all – not having to say “No, we don’t need that” dozens of times before you make it through the checkout.  Yes, grocery shopping alone is a lot less stressful than having the kids along.  However, when you do have to bring them, there are ways to use the time to teach them a little bit about money along the way.

My kids have been coming with me to the store since they were infants.   On some days, the lady behind the deli counter at Loblaws was one of the few adults I got to talk to when I had my newborn son in the Snugli and my 1 ½ year old daughter in the cart.  There wasn’t a lot of money education going on yet, but we certainly used the grocery store to learn some math (which could be called a prerequisite for money).

In the toddler & preschool years, my kids would count out the apples we needed and put them in the bag.  I’d read the next thing off my list and they would point to it and then help count it out.  Counting real things is much more interesting than counting math manipulatives, so we would count everything while we were shopping.  Once they mastered counting small numbers in English, we’d practice in Spanish (at least Dora the Explorer is good for something), and eventually in French.

We practiced low number recognition with aisle numbers and checkout line numbers.   Price tags help with number recognition for higher numbers.  When I was teaching my daughter how to read price tags, as we walked through the aisles, I would ask her how much a certain product was that I was thinking about getting.  Now, she does the same thing with her brother.  So far, he thinks it’s a fun game.

When deciding between two brands of the same item, I’ve started asking my kids (now 7 and 5) which one they think is the better deal.  At their stage, it’s only a fair question when the items are the same volume, but older kids can be taught to figure out the lowest price per gram or ounce.

Teaching kids to be careful shoppers is a skill that will pay back dividends forever.  At this stage, I’ve explained what a sales flyer is and why stores make them.  They know that I will only buy certain things when they are “on sale” because they are just not good value otherwise.  I’ve explained that chicken is usually cheaper at Costco, so when we’re there, we stock up the freezer.

I’ve tried to explain to my kids that the goal of the store is to get you to spend as much money as possible while you’re there.  They put products with the highest margins at eye level, and use special displays to promote impulse buys.  Our shopping goal is to get the products our family needs while spending the lowest amount of money possible.  Obviously my children don’t yet absorb all the ins and outs of merchandising, but each time we go, they learn a little more.

Once children are more established in the careful shopping basics, they can be given small lists to work with where they can make some of the decisions.  You can still be there as a filter, making sure you don’t come out with a cart full of chips when you were going in for produce.

The goal of all this is for kids to eventually be able to shop effectively on their own.  By the time my kids leave home (which thankfully is still a ways off), they should be able to grocery shop & feed themselves within a reasonable budget.

Do you have any tips that I’ve missed?  How do you teach your kids about money at the grocery store?

3 responses on "Teaching kids about money: Tips for the grocery store"